Recently I acquired a Honda ct90 K1 from my father-in-law. 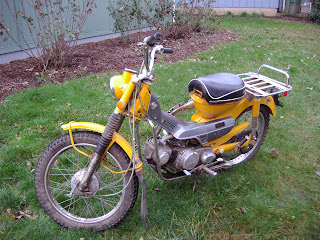 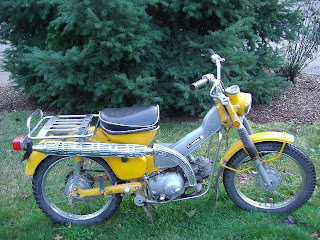 Being my first motorcycle, I have a lot to learn. First, I have to learn how to get this thing street safe and while I am doing that, I have to learn to ride. Yeah, I know it should be easy but since I have never been on any bike other than as a passenger, I figure I should do it right and then create the bad habits.
If I take Basic Rider Training then I do not have to test at the DMV
I would much rather learn and test from a trained pro instructor than test for some DMV employee. Yeah, never had much luck with DMV testing people. That's another post.

I am told this is a simple bike to work on and riding it should come easy.
On my side links you can find a few sites with parts, history and pictures. Honda Japan is still producing these for Australia for the postal service and they are referred to as posties there.
This ct90 has not been running for about 4 years and yesterday I got it started and drove it around the yard for a bit. It has quit a bit of pep and torque. And I got my first offer to buy it! Not for sale.
They were advertised to the outdoors person with the ads showing men and women driving them in the woods with rifles mounted on the side and secured to the back of campers with a simple carrier.
They are also street legal without modification!

I began this experience by going to the local dirt bike shop and asking if they carried parts or knew anything about the ct90. I was answered with "those things are money pits and I hate them". As you can imagine, I won't be spending any money at that shop.
Since then, I have found great resources on the internet and even a few within 20 miles of the house. I have also learned that far from being money pits, these bikes were (are) known for being almost bulletproof! Like many old vehicles, you can spend more money repairing and restoring than what you can sell it for. But unlike most new vehicles, you can actually work on it yourself and most parts aren't equal to buying a new one.

I joined a Yahoo!! Group that has more resources than I thought would exist.
I figured I would have to scrape the bowels of old book stores and parts houses to find wiring diagrams and manuals etc. But I found them and more with this group.

I’ll try to remember to take pictures as I disassemble and reassemble “old yeller”
If you are interested where I have found parts and info, drop a comment and I will be happy to share my resources.
Posted by The Cheezer at 15:26 4 comments:

The Cheezer
I think I made a watch list! Speak your mind with integrity.

You are a Freedom Crusader, also known as a neoconservative. You believe in taking the fight directly to the enemy, whether it’s terrorists abroad or the liberal terrorist appeasers at home who give them aid and comfort.

Take the quiz at www.FightLiberals.com